Beetles are a group of insects that form the order Coleoptera (/koʊliːˈɒptərə/), in the superorder Endopterygota. Their front pair of wings are hardened into wing-cases, elytra, distinguishing them from most other insects.

The Coleoptera, with about 400,000 species, is the largest of all orders, constituting almost 40% of described insects and 25% of all known animal life-forms; new species are discovered frequently. The largest of all families, the Curculionidae (weevils), with some 83,000 member species, belongs to this order. Found in almost every habitat except the sea and the polar regions, they interact with their ecosystems in several ways: beetles often feed on plants and fungi, break down animal and plant debris, and eat other invertebrates. Some species are serious agricultural pests, such as the Colorado potato beetle, while others such as Coccinellidae (ladybirds or ladybugs) eat aphids, scale insects, thrips, and other plant-sucking insects that damage crops.

Beetles are by far the largest order of insects: the roughly 400,000 species make up about 40% of all insect species so far described, and about 25% of all animals. A 2015 study provided four independent estimates of the total number of beetle species, giving a mean estimate of some 1.5 million with a "surprisingly narrow range" spanning all four estimates from a minimum of 0.9 to a maximum of 2.1 million beetle species. The four estimates made use of host-specificity relationships (1.5 to 1.9 million), ratios with other taxa (0.9 to 1.2 million), plant:beetle ratios (1.2 to 1.3), and extrapolations based on body size by year of description (1.7 to 2.1 million).

Beetles are generally characterized by a particularly hard exoskeleton and hard forewings (elytra) not usable for flying. Almost all beetles have mandibles that move in a horizontal plane. The mouthparts are rarely suctorial, though they are sometimes reduced; the maxillae always bear palps. The antennae usually have 11 or fewer segments, except in some groups like the Cerambycidae (longhorn beetles) and the Rhipiceridae (cicada parasite beetles). The coxae of the legs are usually located recessed within a coxal cavity. The genitalic structures are telescoped into the last abdominal segment in all extant beetles. 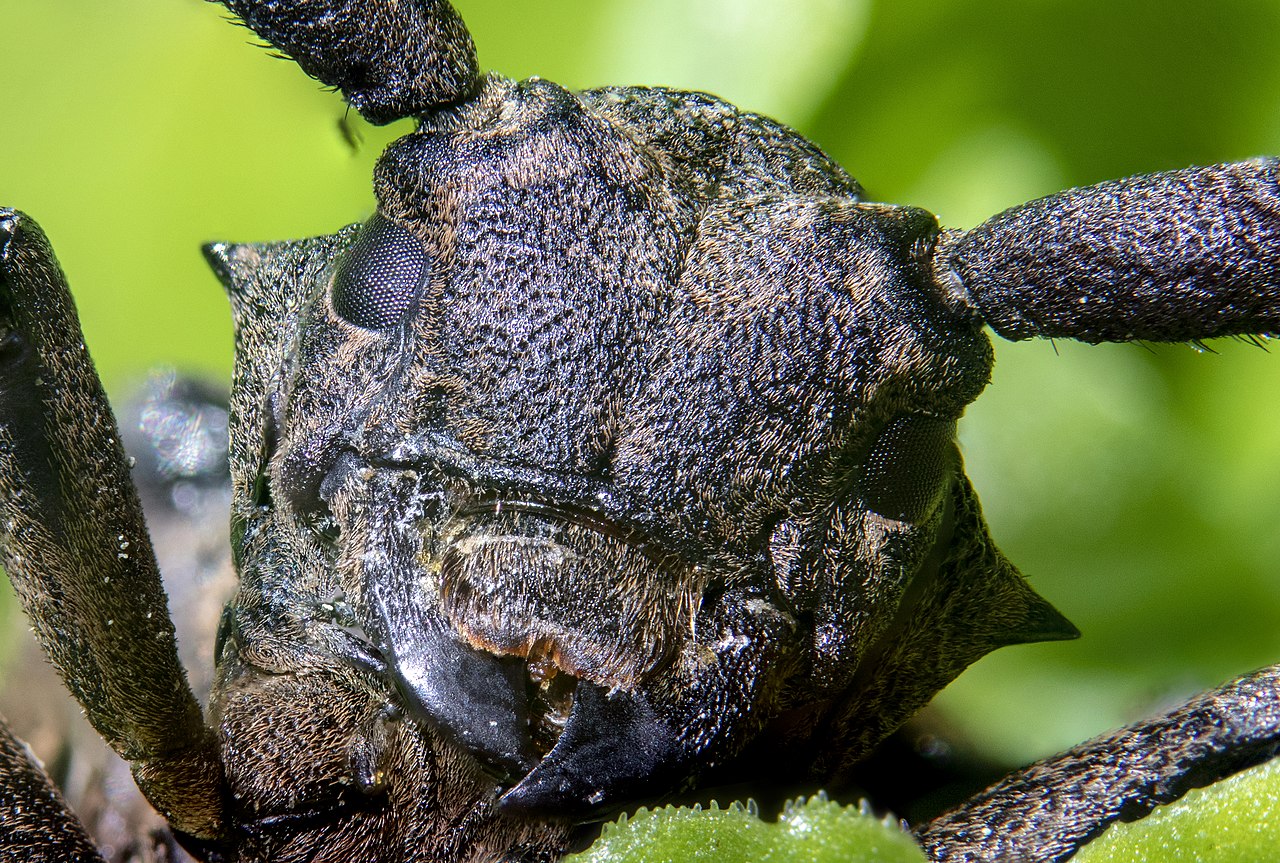 The head, having mouthparts projecting forward or sometimes downturned, is usually heavily sclerotized and is sometimes very large. The eyes are compound and may display remarkable adaptability, as in the case of the aquatic whirligig beetles (Gyrinidae), where they are split to allow a view both above and below the waterline.

Based on this model, insect's mouthparts are made of 5 main structures: labrum, mandibles, maxillae, hypopharync and labium. Beetles have mouthparts like those of grasshoppers. The mandibles appear as large pincers on the front of some beetles.

The mandibles are a pair of hard, often tooth-like structures that move horizontally to grasp, crush, or cut food or enemies (see defence, below).

Mandibles, maxillae and labium are considered true or appendicular appendages because they develop from metameres (also known as somites; segments in which their body is divided) during the embryonal development; thus, these structures are considered equivalent to locomotor appendages from a morphological point of view.

On the contrary, labrum and hypharynx aren't true appendages because of their non-metameric origin, although they are also considered buccal appendages due to their essential role in feeding.

The beetle's exoskeleton is made up of numerous plates, called sclerites, separated by thin sutures. This design provides armored defenses while maintaining flexibility.